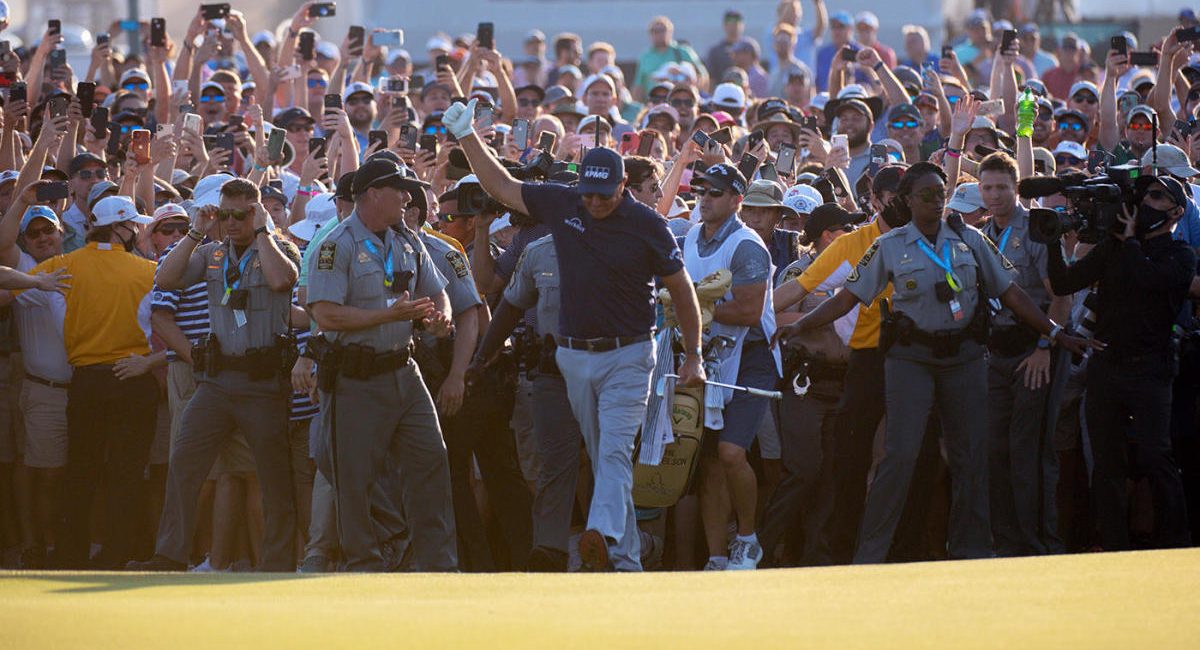 Golf is the loneliest sport on Earth. Exposure at the highest level is emotionally equivalent to a climber free soloing a piece of slab that takes your breath away. A place like the Ocean Course at Kiawah Island exacerbates this feeling because the entire sports world is watching you try and juggle your anger, pride and patience when the strip of land that stretches out into the Atlantic Ocean — which Pete Dye said he would have “begged” for the opportunity to build upon — is doing its best to rip them from your soul.

Somehow, Phil Mickelson won the 2021 PGA Championship on Sunday under these arduous conditions. He warded off the cold, dark night that comes for every athlete that has ever lived, and he engendered a goosebump-inducing call from Jim Nantz at the end: “Phil defeats Father Time.”

It felt as surreal as an ending to a golf tournament has ever felt.

Mickelson’s name belies the inconceivability of this scenario. He closed out the last event he played — the Wells Fargo Championship, two weeks ago — with a 75-76-76 as Rory McIlroy baptized him by 17 (even though Lefty led the tournament after Round 1).

Mickelson had only posted one top-20 finish in a major since nearly winning the 2016 Open Championship. He’d fallen outside the top 100 in the world. He is 50 years old … and just three weeks away from 51.

There was no doubt which horse the seaside spectators were backing as Sunday afternoon started. When nine major championship wins stepped on the first tee box, few were rooting against Mickelson’s playing partner, Brooks Koepka, but even fewer were rooting for him.

Personalities aside, it made logical sense. Koepka acquiring his fifth over Mickelson would have been a top 50, top 75 or maybe top 100 major win ever. Mickelson winning his sixth at 50 years, 11 months and seven days old — with his game in this shape (he’s 143rd in strokes gained over the last six months, according to Data Golf) — well, that would be arguably a top-10 major win of all time.

And then it happened.

It did not happen linearly for the only thing Mickelson does linearly is fly in his private jet from one tournament to the next. It happened as Mickelson’s career has happened with supreme highs and inconceivable lows.

Lefty bogeyed the first, and after Koepka poured in birdie, the one-shot lead had been traded. For the next two hours, they played a perpetual game of leaderboard flip akin to Omar Vizquel and Roberto Alomar turning an eternal double play.

Mickelson dropped an epic bunker shot on No. 5 that rattled marine life up and down the coast. Koepka, improbably, started to fade.

After three straight days of playing Ben Hogan-like golf by splitting fairways and pummeling greens, Phil Mickelson finally started to play Phil Mickelson-like golf: all over the yard, up and down from anywhere you could imagine.

Then, unlike most of the rest of his major-championship career, the rest of the leaderboard started crumbling around him. After Mickelson turned in a roller coaster of a 36 on the front nine, Louis Oosthuizen started pumping approach shots in the water. Koepka looked like he was putting with a croquet mallet.

The result that everyone involved with the PGA Championship was seemingly afraid to even utter out loud for three straight days suddenly felt inevitable as Mickelson led by four with eight holes left. Then he led by five standing in the 13th fairway. It was over sans the Vince Carter GIF. Then the unraveling, of course, began.

Mickelson hit his approach in the water, made bogey and also bogeyed the next. It was suddenly … not quite over. However, home was close and the push was on.

Lefty made four straight fours for the win, hitting drives like it was mid-July at Camden Yards and hitting putts like he’d just been introduced to the sport. He changed his grip for a short bogey putt on the 17th. Mickelson is nothing if not completely and totally committed to finding an elusive perfection in this sport that does not exist. His dedication to it is aspirational.

Golf has been as strange to watch in the last year as it’s ever been in its 300-year history. It’s never been easier or more fun to observe a broader collection of young and old stars in this sport, and yet, because of the COVID-19 pandemic, that has not been possible, at least in person.

Watching on television was bizarre. The loneliness golfers so often feel was personified by what came through on TV: Nobody was there to roll down hills after walk-off wins or scream into the ether when stars traded mind-bending putts. It was not desirable, but it was a fascinating peek into what the hearts of these men we think we know probably feel like most of the time.

It was fitting, then, that chaos reigned on the 72nd hole of the most improbable win of Phil Mickelson’s career.

His entire three-decade existence in this sport has been chaotic, but in so many ways, he has walked the course as the common man’s champion. Tiger Woods did him some favors there.

Nothing about Mickelson’s existence has actually been common. He drank a $40,000 bottle of wine out of the Claret Jug after he won the 2013 Open Championship, his last major victory. But because Tiger was cartoonishly good, it made Lefty feel more endearing. He popped a few thumbs, and an entire persona was built.

As Mickelson walked up the 72nd hole, needing only for his second shot to hit the green to touch off one of the great feats in sports history, the dam broke. I hope it broke in him, too.

As fans flooded the fairway and swarmed Mickelson, he dropped a 9-iron to checkmate range. What unfolded behind and in front of him was absolutely beautiful.

The sun stood still over his shoulder and splayed the shadows of the men and women who have been invisible at major championships for nearly two years as Mickelson marched toward the Atlantic Ocean. He fist-pumped the win twice, and the earth moved a little bit.

Though Phil Mickelson has nearly nothing in common with anyone in his wake, that was all kind of the point of the entire thing, wasn’t it?

After a year of ducking public appearances and holing up in our homes and vowing to kill a virus that rolled uninvited into the lives of so many hundreds of thousands of people, we have a new appreciation for those around us. That’s what came to mind as Lefty walked toward golf history.

Phil Mickelson may have won this PGA Championship even without spectators in attendance. I kind of doubt it. That’s not really who he is, and that’s why he’s easy to fall in love with.

So as thousands pushed him toward the Atlantic and he staved off the curtain for yet another day, I couldn’t help but think about how much meaning that moment held. It was spectacular to watch in 2018 at the Tour Championship when the same swath of fans enveloped Tiger Woods, but this one — given the stark juxtaposition to what has transpired worldwide — was far more intimate.

The loneliest sport turned into the most meaningful public gathering at a tournament in years.

Mickelson, golfer of the people, putted out for the win, and it hit me like it hit everyone.

But boy, is it a hell of a lot more fun when we do.

Rick Gehman is joined by Kyle Porter and Greg DuChamre to break down and react to Phil Mickelson’s victory at the 2021 PGA Championship. Follow & listen to The First Cut on Apple Podcasts and Spotify.