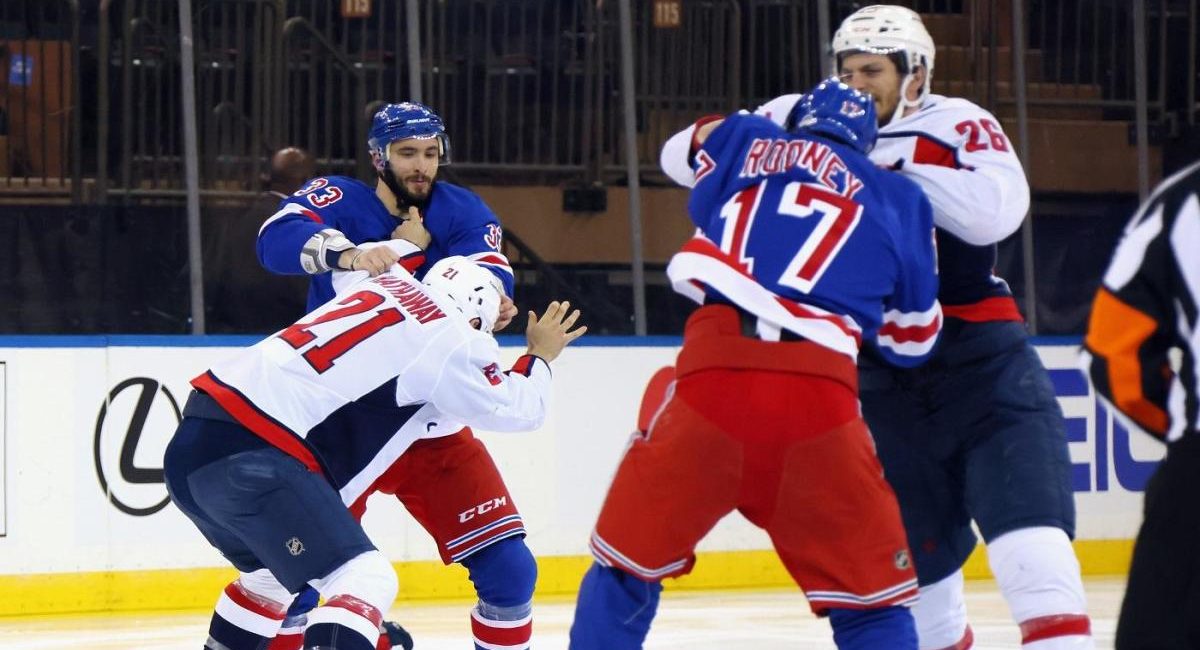 The Rangers and Capitals broke an NHL fighting record, plus John Means is nearly perfect in no-no for O’s

Hi everybody! This is Gabe Fernandez, the last of the Three Amigos taking over morning newsletter duty. Hope you celebrated last night responsibly, if you chose to do so at all.

Last night for dinner I made some couscous for the first time in my life. One of the rare bright spots about being stuck inside all the time has been expanding the breadth of what I cook. I’d show off a photo of the finished product, but my stomach took over my brain before my social media sensibilities could. What about you all? Made anything new recently? Let me know on Twitter.

Anyways, let’s get to some sports. Today we’ve got an Orioles no-no, some Rangers-Capitals drama and a Champions League Final set, among some other stuff.

📰 What you need to know

For the first time in over 50 years, an Orioles pitcher has thrown a no-hitter. The man who broke that streak was John Means against the Seattle Mariners on Wednesday. Means has been a bright spot in a mediocre O’s team that was predicted to have a ZERO percent chance of making the playoffs this season. He might have solidified his spot as an All Star and potentially a Cy Young candidate with this performance.

Even though I’m not an Orioles fan, I went to a lot of games at Camden Yards as a kid and follow a lot of people in that fanbase on Twitter, so it was a genuinely cool moment to not only see the accomplishment in real time, but also the celebrations from people who have endured a lot of (admittedly justified) mockery of their favorite team over the last couple seasons.

Beyond the emotional mumbo jumbo, here are some fun facts about this no-no:

As a result of the previous point, we are currently in the longest stretch between perfect games (the last one was Felix Hernandez, Aug. 15, 2012) since the one from 1968 to 1981

It’s just one of those things that makes you appreciate the beauty of the sport. Surely nothing could ruin this moment.

2. The Rangers and Capitals really don’t like each other 🏒

The New York Rangers fired both the team president, John Davidson, and general manager, Jeff Gorton, officially because the team “underachieved” throughout the season. But some astute fans couldn’t help but notice that this personnel move happened less than one day after the team released a statement expressing anger with the NHL‘s Head of Safety, George Parros. That’s because the league responded to noted Capitals goon Tom Wilson injuring Rangers star Artemi Panarin and punching Pavel Buchnevich while he was down on the ice with a $5,000 fine.

The team went as far to say that Parros was “unfit” to be in his role.

This saga naturally continued on Wednesday, the second time that the teams faced off with the grudgiest grudge match that everyone, except for the league’s Department of Player Safety, saw coming. As expected there were many fights, and it was actually the first game in NHL history with six brawls in the first five minutes.

Since this is the first time we’re broaching this topic in the newsletter, here’s a brief timeline of everything that has happened since the start of Monday’s game:

3. Champions League recap: Get ready for an all-English final ⚽

The Champions League final is officially set, and it’ll be an all-English duel to determine who the champion of Europe is. Chelsea defeated Real Madrid 2-0 in the second leg of their match, winning 3-1 against Los Blancos on aggregate.

Madrid had their chances throughout the 90+ minutes, but it always seemed like a matter of when rather than if the Blues would score given their propensity to get on the counter attack. Strong saves from Thibaut Courtois kept things from getting worse than they eventually became. Chelsea will take on Premier League-leading Manchester City at the end of May for this European title.

One of the more notable highlights that got a lot of social media traction happened after the game when ex-Chelsea man Eden Hazard cheered giddily with some former teammates. It caused quite a ruckus among the Madridistas, which only accentuated the frustrations many held towards the Belgian for his compulsive underperformance with the team after signing to the Spanish giant for $100 million in 2019.

But back to the game at hand. Our soccer scribe Roger Gonzalez chronicled the previous times the two sides matched up in the Premier League this season and here’s how they shook out:

4. MLB suspensions haven’t made any sense this season ⚾

Bench-clearing brawls have been the springboard for some, frankly, quite stupid suspensions from the league towards players that are simply passionate about the game. Our baseball scribe Matt Snyder took exception with the latest of these, where Reds pitcher Amir Garrett was hit with a seven-game suspension for “inciting” a benches-clearing incident against the Cubs this past weekend.

To put that in perspective, Cubs infielder Javier Baez, who was majorly involved in the incident, was only hit with a fine. This was combined with other incidents that had similar lop-sided punishments in regards to benches clearing, like Jose Alvarado getting three games for yelling at the Mets, and Nick Castellanos (“as there’s a drive into deep left field…”) getting two games for standing over Jake Woodford, despite the fact that he was walking away.

Here’s Snyder’s perspective on this issue:

📺 What to watch today

Best thing I saw on the internet 🏅

Those of a certain age will remember Ned’s Declassified School Survival Guide as a really good show that would give us all the tips of life (it did not). You might also remember a cameo from a young Carmelo Anthony appearing as the voice of reason for Ned. It made the rounds on Twitter earlier this week.