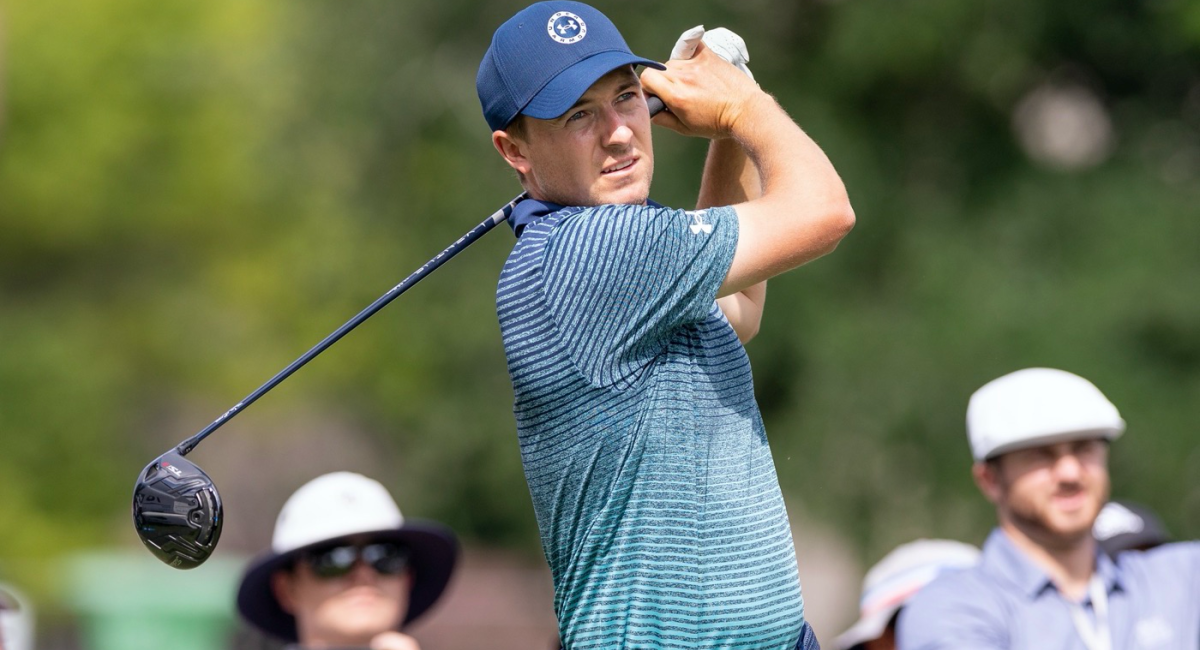 The best player of the 2021 golf season to this point shot the best round of the day in Round 1 at the 2021 Charles Schwab Challenge. That’s one way to tell the story. The other way is this: Jordan Spieth shot a 7-under 63 at Colonial Country Club in his first round back from the PGA Championship and now stands the heavy favorite to win for the second time in as many months, even though Sergio Garcia tied him with a 63 of his own late in the day.

Spieth’s bogey-free 63 at Colonial was both flawless and not entirely unexpected (we’ll get to that part in a minute). Starting on the 10th hole in Round 1, Spieth made five 3s on that side of the course before flipping to the front side and making four more (plus a 2). He closed with birdies at each of his last three holes, including an incredible chip-in on the par-3 8th and a dagger approach at the 9th. At the end of the day, he was nearly leading the field in strokes gained tee to green as well as with the putter.

It’s that flat stick that has haunted at times so far this year. If he’d putted field average at either the Masters or the PGA Championship, he would have won the former and may have done so at the latter as well.

“It’s hard to go any lower,” said Spieth. “Made some putts, got started on the first hole today, that one goes in, and that’s what I talked about before the tournament. If I could get a couple to go in early in the first round and the confidence and the work I’ve been doing on my stroke the last few days — which is a somewhat significant change in a stroke feel — I thought that would exude just a little bit of confidence into the rest of the round on greens where I’ve been very successful on before.”

“It was really just with the putter,” he said regarding his T30 at the PGA Championship. “I just didn’t give myself enough chances last week, just missed too many putts, and so for me coming into this week it didn’t really matter pairing, tee time. It was let’s pinpoint what’s going on in the stroke, let’s start to make some adjustments and literally stay on course with everything else.”

Spieth is — by a wide margin — the best player on this golf course over the last decade as he was again on Thursday. He has five top 10s in his last six starts at Colonial, including a win back in 2016. He torches this place, and even when his game was not there overall, he found a way to make it work at Colonial. His 2.54 strokes gained per round at Colonial is nearly a stroke better than second place (Kevin Na, 1.76).

He said he was hopeful for 4 under on Thursday and took it to 7 under. He’s hitting putts. The tee-to-green work has been world-class for months. It all sounds very problematic for the rest of the field.

This does not necessarily mean he’s going to go on to win his second Charles Schwab Challenge, of course, but it might. Since Feb. 1, Spieth has five top-five finishes and just one win. His performance for five months has been one of somebody who wins multiple times in a given year.

Spieth won the Texas Open in April, and he would probably love to save the others for the U.S. Open in June and Open Championship in July. However, given how desperate the last three years often felt to him, I’m sure there will be just as much joy on Sunday evening if atop the board as there was when he downed the field in San Antonio just under two months ago.

Spieth is a normalizer. All the great ones are. For the first five years of his career, he made the preposterous seem commonplace. That’s why, even though he had not completely fallen off the planet with his game over the last few years, it sure felt like he had.

That’s what resounded in Round 1. That a 63 on a Thursday, which would have felt so foreign just six months ago when he was still wandering in the desert, now feels quite normal, like it is supposed to happen. The best player in the world, a generational great, playing the way he’s supposed to play once again.