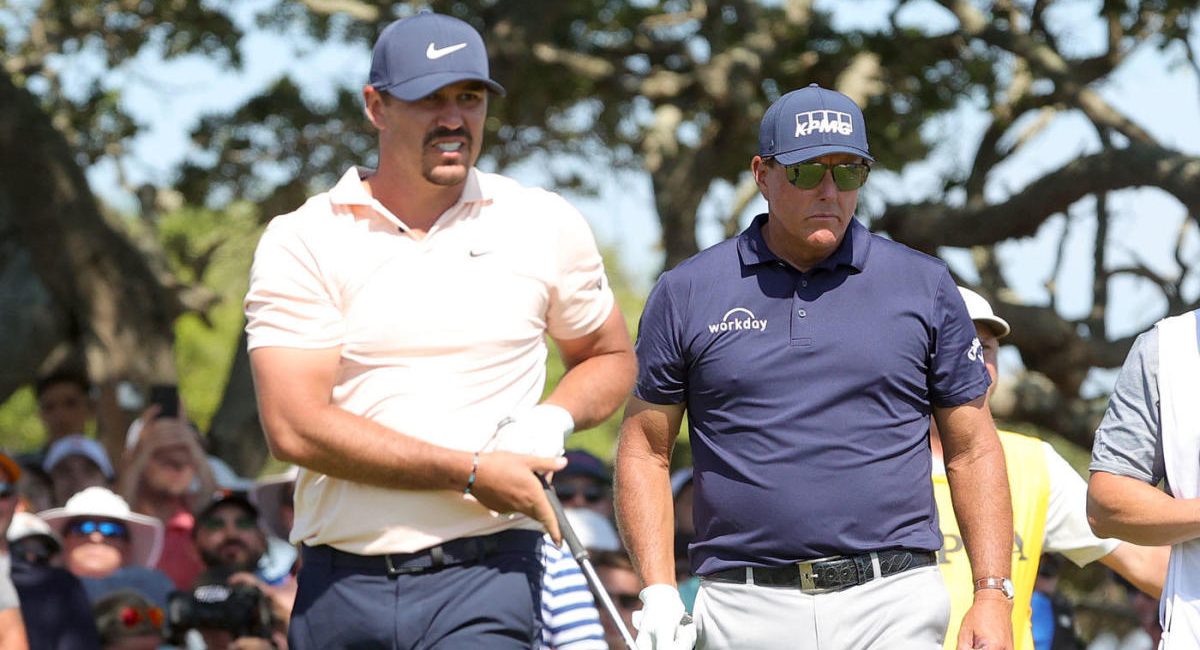 When major weeks feel like a dream, as last week’s PGA Championship often did, there’s always the shock of Monday morning to make you remember that they are not. After seven straight days of imbibing from the deepest well of major championship golf at a course like Kiawah, it’s jarring to wake up and find only the photos that were taken to commemorate the experience.

Sometimes that jolt back to reality is a welcome one, but this Monday’s only serves as a reminder that Phil Mickelson, half a century old, really did hug that trophy next to the Atlantic Ocean on Sunday evening. He really did the thing that nobody actually thought he could do until about the 280th of his 282 strokes last week.

I found myself wishing it was a five-round event.

The 2021 PGA was the most recent victory in a long run of major victories with ever-increasing importance. You could make the case, dating back to the 2019 Open Championship, that each of the last six majors has been more meaningful than the one that preceded it. That each of the last six champions has changed his legacy more than the man who won before him. It’s been a wild few years in the golf major world, and it makes you wonder what’s in store for the U.S. Open at Torrey Pines next month.

First, let’s start with the man who had nearly as much history on the table as Mickelson did on Sunday at Kiawah.

1. Brooks is a great champion: You might not like Brooks Koepka, and there are ways in which he makes himself actually very easy to dislike. His bravado sounds great until all he needs is 72 on Sunday for a playoff, and it feels for the last two hours like he doesn’t even have a shot. You wish he would let you in just a little bit more and try to prop up the tough-guy bit just a little bit less. Perhaps his front is also his fuel, but it’s not very endearing when it doesn’t go the way he imagined.

However, it’s important to remember just how great of a champion Koepka is. It’s not just that he nearly matched his playing partner’s career major total on Sunday at Kiawah, but the way he’s stuck himself in the arena under the harshest light and most difficult circumstances — even when his body doesn’t want to do it — is truly the work of a champion. Koepka missed the cut at the 2021 Masters, finished T29 at the 2020 PGA and T39 at the 2018 Open. In the 13 other majors which he’s played, dating back to the 2016 PGA at Baltusrol, he’s lost to just 42 golfers.

A lot of his achievement gets lost in his machismo for a variety of reasons, but don’t let the hats or the knees or the goatee or his “I only practice when it matters” chatter dissuade you from the reality that Koepka is one of the great champions of the modern era. The evidence of this reality is that he continues to give himself high-level chances at big-boy trophies just as much as it is that he already has a four-pack of them in his living room.

2. Kiawah will age well: There have been three high-profile events at the Ocean Course on Kiawah Island. The first was maybe the greatest Ryder Cup of all time in 1991. The second was probably Rory McIlroy’s greatest major performance ever. And now this — one of the 10-best major wins in history and a super-duel won by a six-time major champion.

Though it does not have the history of an Oakmont or a Winged Foot, these victories will age well because Kiawah will age well. As more championships pile up on that course, we will start to talk about in the reverential tones normally reserved for places like Shinnecock and Riviera and Augusta. Though it has few truly memorable holes like some of the other courses at which majors are played, it might be the ultimate “the whole is greater than the sum of its parts” championship course in the modern rota. I’m already prepared for an event to return.

Want the sharpest DFS advice, picks and data-driven golf analysis? Listen below and subscribe to The First Cut Golf podcast where we explain what’s happening on the course so you can win off of it.

3. The scene on 18: After nearly two years with fewer collective fans at major championships than there often are inside the ropes at a Ryder Cup, Sunday evening’s swarming of the 18th landed even more deeply than it often might. The scenes speak for themselves, but the one I’ll always remember — and I wrote about this a bit on Sunday evening — is Mickelson, body slightly cocked, walking toward an even greater weight of glory than he has already achieved, giving the conglomeration of patrons beyond him a final thumb. I don’t think he wins without them. I don’t think they swarm without him. It was the perfect reintroduction of this amount of people to major championship golf.

4. The sun is still standing: On Saturday night, I wrote about how Mickelson was trying to stave off the night, to pin the sun low in the sky against the horizon and keep his career away from the desolate places where all careers eventually go. He did it, and then he took this iconic photo against the Atlantic Ocean. It was perfect.

5. Perfect setup and conditions: Though Bryson DeChambeau talked about how this was maybe the most difficult course he’d ever played, nobody talked about it being unfair. The wind was harsh but not cataclysmic. The setup was penal but not intentionally so. Three-time major winner Padraig Harrington said it perfectly.

“I can’t tell you how good a setup this was this week,” said Harrington. “I have to say, this was probably the best major setup I’ve ever seen. It may have been equaled in the past but couldn’t have been better. I know the golf course is fantastic, but they really set the course up that there was opportunities to make bogeys and opportunities to make birdies. It really was that case. I’d love to play this style of golf every week and I would be a bit more competitive than playing a regular tour event, it’s hard. It’s a lot easier, these majors.”

6. What do we make of Louis Oosthuizen? The five-time runner-up at major championships is a beneficiary of his own rhetoric. Here’s the thing with Oosthuizen (who I absolutely love): to my knowledge, he’s never said — like Rory McIlroy and Jordan Spieth and Brooks Koepka have said — that majors are the most important events, the only ones that truly matter to him. Because of that, we don’t hold him to his own standard the way we do with these other guys. So when he finishes runner-up, instead of saying, “What’s going on with Oosthuizen racking up all these near-wins?” we say, “Man, that was fun, hope the tractor fires up properly on Monday afternoon.” Not making declarative statements about the importance of majors is a much less stressful way to live life, but his Wikipedia page does take you down some rabbit holes (though he’s almost certainly never looked at it).

7. Why make picks? We talked about this on the First Cut Podcast on Sunday evening, but why even pick golf tournaments if Phil Mickelson, Padraig Harrington and Rickie Fowler — combined seven top 10s in the last two years — are all going to finish in the top 10 this week? The obvious answer is that you can find value way down the board, but if three guys who have been playing that poorly coming in (again, Mickelson shot 75, 76, 76 in his last three rounds before this tournament), then I have absolutely no clue how you’re supposed to find it.

It speaks to what a slippery, elusive game golf truly is. Also of note is that if you would have told me on Monday that two four-time (or more) major winners would finish in the top two of this tournament and a three-time major winner would finish T4 and that none of these people would be Rory McIlroy or Jordan Spieth, I would have a lost a lot of money on that bet.

8. Jon Rahm on Phil Mickelson: A lot of players were asked about Lefty on Sunday, and a lot paid great tributes to the champ, but I’m not sure any of them were as good on him as Rahm.

“We all know what he’s capable of, but the fact that at his age, it hasn’t been done, it would be unbelievable,” Rahm said before Mickelson won. “He’s been very close many times to win majors and one could say that five may not be enough to how good of a career he’s had, and I really hope he gets his record. I hope he gets his win. I hope he gets to put that stamp in history that would not be beaten in a very long time.

“His enthusiasm is what keeps him going. At his age, has the same enthusiasm I have at 26, and he’s been doing this a very long time. I mean, he’s been on Tour as long as I’ve been alive. For him to keep that willingness to play and compete and practice, even when he hasn’t been working, it’s truly admirable, so I hope he gets it done.”

9. I love how much Phil loves golf: Say anything you want to say about Phil Mickelson (and there is plenty to say), but the reality of winning a major championship at age 50 is that you have to love it as much as you love anything in your life. Not in an, “Oh I’m tall so I should play basketball” kind of way, but in a psychotic, “I’m going to change my putting grip on the 71st hole of a major championship with a three-stroke lead” kind of way.

Mickelson is, affectionately, a sicko. To do this at this level for 30 years … you have to be. That was the through line you heard from everyone in the sport who commented on his win on Sunday. He loves it. He cannot get enough. You can sort of get away with simply being preternaturally-gifted when you’re 21 or maybe 31. When you’re 51? No chance. Mickelson said as much, using the word “work” 17 times in his post-round press conference, with this being the best quote of them all.

“My desire to play is the same,” said Mickelson. “I’ve never been driven by exterior things. I’ve always been intrinsically motivated because I love to compete, I love playing the game. I love having opportunities to play against the best at the highest level. That’s what drives me, and I think that that’s what is — the belief that I could still do it inspired me to work harder.”

At the Masters in April, I stumbled into Mickelson hitting a series of pitches and chips and flops in a hidden little nook of the property at Augusta National where nobody else was around. He was by himself. Just grinding his ass off the way he surely has for hours and hours and hours at home and on ranges and practice areas all over the world for the last six (and last 46) years. It might be an act of cognitive dissonance to actually believe that work is going to pay off, even more so to hope that it could. But Sunday was a reminder that, for aging legends as committed as Mickelson, playing and winning is a result that got in the way of an extraordinary love for the game and its mastery. That will get lost amid the hoopla of the win, but I sure hope it does not.