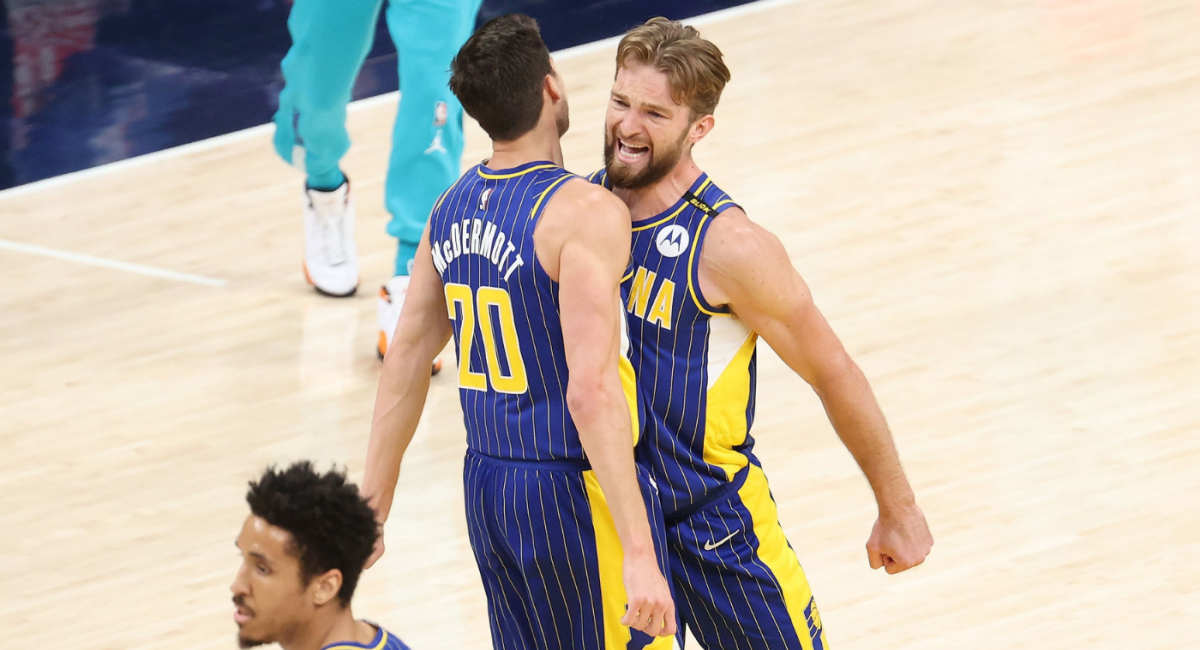 Why it will be no Caris LeVert, no problem for the Pacers, plus other best bets for tonight

Greetings fellow gamblers, it’s Chris Bengel stepping in for Tom Fornelli on this lovely Thursday. I feel a few years older this morning after watching the Play-In Tournament marathon between the Golden State Warriors and Los Angeles Lakers. Luckily, I didn’t have any bets in on that one and could simply enjoy it as a fan.

If you had to sweat out a spread or moneyline bet, my thoughts and prayers were with you.

In terms of today’ slate, there’s no shortage of action between the NBA Play-In Tournament rolling on, the PGA Championship, NHL playoffs and more MLB tilts. There’s so much to place your hard-earned dollars on, but I’m here to navigate you through those challenging waters as we head towards the weekend.

Let’s have a day and win some cash!

Indiana Pacers at Washington Wizards, 8 p.m. | TV: TNT
The Pick: Pacers (+3.5): Caris LeVert remains out of the lineup due to health and safety protocols and you would think that would mean that I’m staying away from the Pacers in this one. You would be incorrect. I made the mistake of taking the Hornets on the moneyline against the Pacers on Tuesday, and I won’t make the same mistake twice.

Even without LeVert, the Pacers looked absolutely unstoppable. In Indiana’s 144-117 victory, eight Pacers finished in double figures and this was a group that shot a remarkable 45.7 percent from beyond the arc. The roster is so deep that Oshae Brissett and Doug McDermott were the team’s top two scorers.

Don’t get me wrong, the Wizards are a strong team that really closed the season strong. But it’s also worth noting that three of Washington’s final three regular season wins came against the likes of the Hornets, Cavaliers and a depleted Raptors team.

Now, the Wizards did defeat the Pacers, 133-132, on May 8 in a game where Bradley Beal and Russell Westbrook combined to score 83 points. I just don’t see that happening again. I won’t be surprised if the Pacers win this game outright, but take the points for a little added cushion.

Key Trend: Pacers are 6-0-1 in their last seven games ATS

Here’s what SportsLine is saying about the game: The simulation model has strong leans on both the spread and Over/Under

Vegas Golden Knights at Minnesota Wild, 9:30 p.m. | TV: NBC Sports Network
The Pick: Golden Knights (-110): Like Tom Fornelli, hockey isn’t exactly a sport I gamble in a ton, especially when the playoffs roll around because anything can happen. I feel really good about the Golden Knights in this spot, though. Yes, the series is knotted at one game apiece entering Game 3, but it’s alarming that the Wild have scored just two total goals in the first two games of this series.

One of the biggest reasons for that has been the play of veteran netminder Marc-Andre Fleury. Fleury has stopped 63 of the 65 shots that he’s faced in the series. It’s not exactly the first time that Fleury has stood on his head in the postseason, as he did win a pair of Stanley Cups with the Pittsburgh Penguins earlier in his career.

It’s also worth noting that the Golden Knights have faced a decent amount of adversity in this series. Vegas dropped a 1-0 contest in Game 1, then the Wild took a 1-0 lead in the first period of Game 2. However, the Golden Knights were able to rattle off three unanswered goals to cruise to victory. Now the Golden Knights hit the road where they are 17-5 as a road favorite over their last 22 games. Roll the dice with Vegas in this one.

Key Trend: Golden Knights are 8-2 in their last 10 road games

Clearly, the Red Sox offense is incredibly dangerous and that’s what makes Thursday’s pitching matchup pretty favorable. Blue Jays starting pitcher Steven Matz does lead his team with a 5-2 record, but he has surrendered at least three runs in four of his last five starts. Matz also hasn’t gone more than five innings in each of his last five starts and owns a 4.34 ERA over his career.

After getting blanked 8-0 on Tuesday, Boston bounced back with a seven-run outburst and chased Ross Stripling after just 3.2 innings. The Red Sox offense has been good to me this season and I expect that trend to continue. Take the underdog in this one.

Key Trend: Red Sox are 7-1 in their last eight games against a team with a winning record

🔒 SportsLine Pick of the Day: Three experts made picks for Astros vs. Athletics tonight, and two of them are the exact same bet on the Over/Under.

I love the Red Sox to pull out the win tonight and I also believe there could be quite a few long balls hit tonight between them and the Blue Jays. Take a chance on these sluggers going deep.