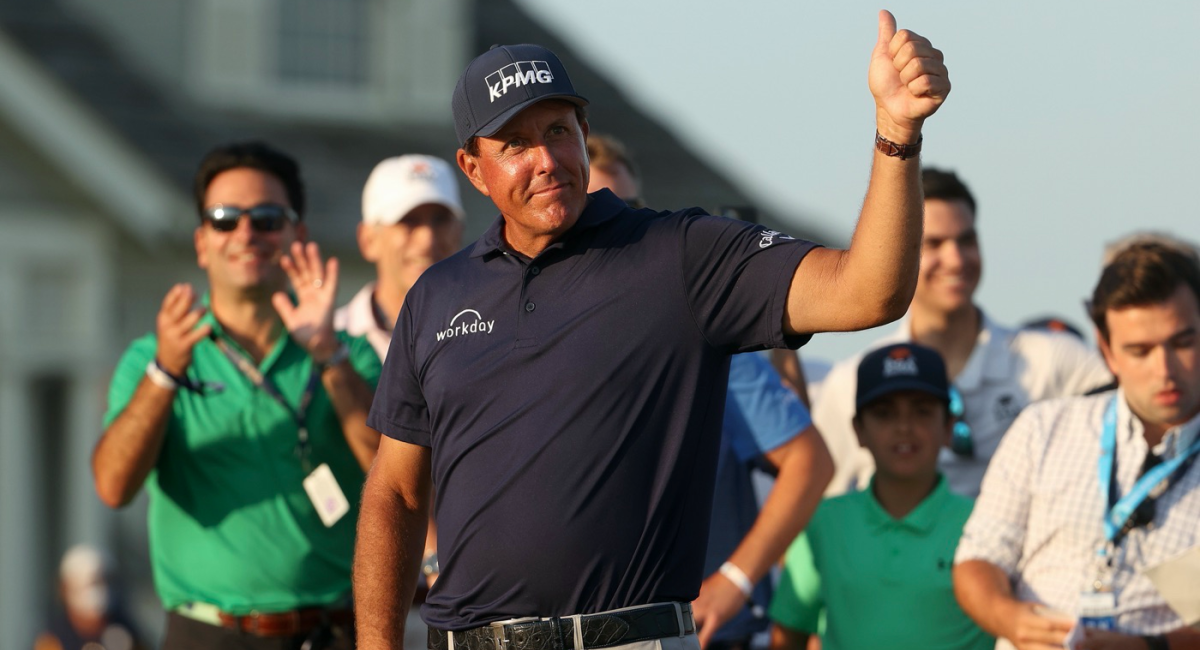 As soon as the last putt dropped on the 2021 PGA Championship, the queries began. Could Phil Mickelson … actually win the U.S. Open in June at Torrey Pines as well and join the group of five men who have won the career grand slam?

This would have seemed an audacious ask just a week ago, but Mickelson was brilliant, borderline sublime, at a U.S. Open-like course on Kiawah Island. At age 50, he displayed every trait needed to win a major championship, including the one that has often eluded him at this stage of his career — mental and emotional focus for 72 holes.

The U.S. Open question has quietly been dead for a while now. Lefty, who was 200-1 to win the PGA but is now 50-1 to win at Torrey, has not contended at a U.S. Open since 2013, and does not even have a top-40 finish since 2014. Last week’s victory at Kiawah, his sixth major championship win, resurrected it, though, and now there is some serious buzz around Mickelson achieving really the only thing that could materially affect his legacy from now until he retires.

Want the sharpest DFS advice, picks and data-driven golf analysis? Listen below and subscribe to The First Cut Golf podcast where we explain what’s happening on the course so you can win off of it.

He’s won three times at Torrey Pines, but in 2008 when Tiger Woods was touching off a major win of equal improbability to Mickelson’s recent PGA win, Lefty finished T18. Still, there will be real energy around a final U.S. Open push. Mickelson recently accepted a special exemption into this year’s U.S. Open from the USGA, which he no longer needs because of his PGA win. He’s exempt into the next five starting this June at Torrey.

“I’ve believed for some time now without success that I could play at my best and compete in major championships still, but until this week, I haven’t proven it to myself or anyone else.

“I do believe that I believe that if I stay sharp mentally I can play well at Torrey Pines. I’ll take two weeks off before that and go out to Torrey and spend time on the greens and really try to be sharp for that week because I know that I’m playing well and this could very well be my last really good opportunity.  Although I get five more, but [my last] really good opportunity to win a U.S. Open. So I’m going to put everything I have into it.”

The way of the modern U.S. Open does not set up well for Mickelson. It has become a true “who can hit it the farthest and find it” contest, which is implied by the fact that Bryson DeChambeau, Gary Woodland and Brooks Koepka have combined to win the last four U.S. Opens. While Mickelson’s driving has dramatically improved and it actually righted the ship for him on Sunday at Kiawah, he likely does not have the firepower to keep up with that caliber of driver for 72 holes when they can let it ride and not worry about the consequences.

But I would have made a very similar case this time last week, and then Mickelson went out and did the dang thing at Kiawah. So who knows. Crazy things happen in golf, and the only thing crazier than Mickelson lighting up a place like Kiawah to graduate from the five-major club would be him going back to back at Torrey Pines to win his seventh (!) and making a grand slam club with just five total members a newly-formed group of six.