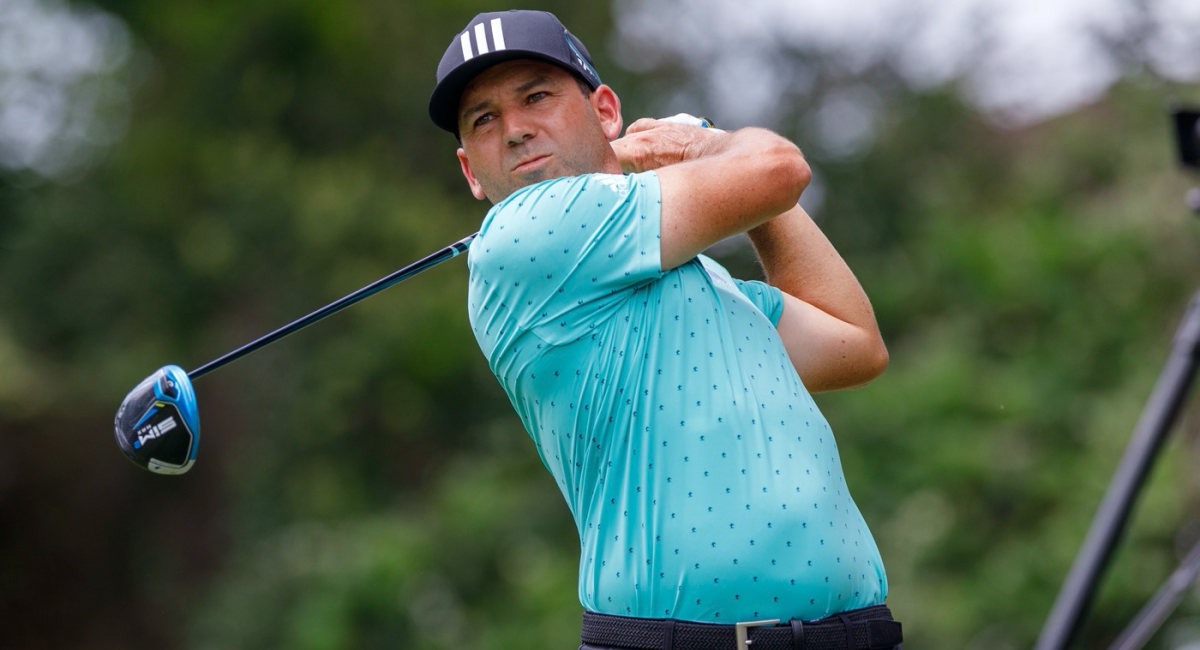 Phil Mickelson turned back the clock last week at the PGA Championship, and it stayed there Thursday at the Charles Schwab Challenge as 41-year-old Sergio Garcia tied Jordan Spieth with a 63 in Round 1 at Colonial Country Club. Both Garcia and Spieth are former champions of this event, and both have games perfectly suited for a place like Colonial.

Spieth was flawless early in the day, and it looked like his lead was going to stand all day until Garcia tied him late with the ball-striking round of the day. Toward the end of his first round, it looked like Garcia might surpass Spieth as he got to 7 under with a birdie at the 15th. However, he closed with three straight pars to “settle” for 63 and a share of the lead after 18 holes.

“Great round,” Garcia said. “I’m not going to lie, conditions weren’t easy. Because of the rain the course wasn’t too firm, even though it firmed up nicely between yesterday and today. But yeah, it was quite breezy. It was gusty so it wasn’t easy to pull some of the clubs. There were some tough holes out there, but I was able to hit really good shots on those holes, and a couple up-and-downs when I needed them. Very happy with the way it went.”

It’s easier to trust Spieth in this co-leading spot given how well he’s been playing so far this year, less so Garcia. The 11-time PGA Tour winner has missed four consecutive cuts (after showing out at the WGC-Dell Match Play in March), including both the Masters and PGA Championship.

Garcia’s finishes might be a bit misleading, though, as his ball-striking has been terrific. A shaky putter has been the worst of any of the 35 best ball-strikers in the world over the last six months. On Thursday, though, Garcia gained nearly three strokes with his putter, which is both unsustainable but also the type of putting we day we see from golfers like Garcia when they go on to win tournaments.

Whether he does that remains to be seen, but Mickelson winning last week 30 years after winning his first might be foreshadowing for Garcia, who is celebrating the 20-year anniversary of his win at Colonial (back when Spieth was 7 years old).

“I didn’t think that it was my 20-year anniversary,” Garcia said. “I didn’t even think about that, now that you mention it. But it’s nice. It’s nice to go through those milestones, I guess, and it just shows me how long I’ve been out here and how fortunate I’ve been to be consistent throughout my career, touch wood, but obviously quite healthy.”

Here’s a look at the top of the leaderboard and who’s contending at Colonial.

T1. Jordan Spieth, Sergio Garcia (-7): We’ve covered both of these guys now, but how much fun would a Spieth-Garcia ball-striking show be over the weekend at a place like Colonial? Nothing can top what transpired last week at the PGA Championship, of course, but that would be among the few scenarios that could at least step out of the long shadow Mickelson cast over the next few weeks.

T3. Erik Compton, Jason Kokrak (-5): There’s a cool story developing here with two-time heart transplant recipient Compton, who received a sponsor invite, being two back of the major winners. Compton has just three starts on the big boy tour since 2016, and he did not make the cut in any of them. For him to make it to Saturday, much less contend at this event, would be an excellent feat.

“It’s hard to sum it up, but it’s a lot of work, and I’m a fighter, I’m a grinder,” Compton said. “I put one foot in front of the other. I’m just blessed to be alive really. Spent most of my life with somebody else’s hearts. It’s a challenge, but I do the best that I can.”

T5. Adam Hadwin, Brandt Snedeker, Kramer Hickok, (-4): Snedeker has quietly (very quietly!) been playing some solid golf of late. Despite falling in the Official World Golf Rankings to nearly No. 150, he’s rebounded with three top-20 finishes in his last four starts. This T5 is not just a case of a hot putter, either. Snedeker hit 11 of 14 fairways and 14 of 18 greens. He can absolutely contend here if that continues into the weekend.

T8. Patton Kizzire, Cameron Tringale, Talor Gooch, Robert Streb, Sebastian Munoz (-3): Huge props to Tringale who shot 67 in his first round back after that ghastly 48 on his front nine last week at the PGA. He bounced back on that second nine to shoot 34 and followed that up with a 33-34 on Thursday at Colonial. He’s been playing terrific golf – probably the best of his career – over the last few months, and he’s a good bet to continue that good play on into the weekend (as long as you can ignore that 48).

T13. Ian Poulter, Patrick Reed, Justin Rose, Daniel Berger (-2): Some horses in this group just five back of the Spieth-Garcia duo. Berger is the defending champion, and Rose finished in the top 10 at the PGA last week. Berger is probably the best bet out of this group to eventually contend, but Reed has me interested if he’s going to hit it like he did on Thursday (top 20 on approach shots).

T87 Phil Mickelson (+3): He is unlikely to make the cut, but nobody will care about that. He also gave the quote of the day in Round 1.

Q: Obviously you had said you wanted to come here and build off the momentum. I know this isn’t quite the day you wanted. Talk about today and how difficult it was.

Rick Gehman and Jonathan Coachman recap Thursday’s first round action at Colonial. Follow and listen to The First Cut on Apple Podcasts and Spotify.