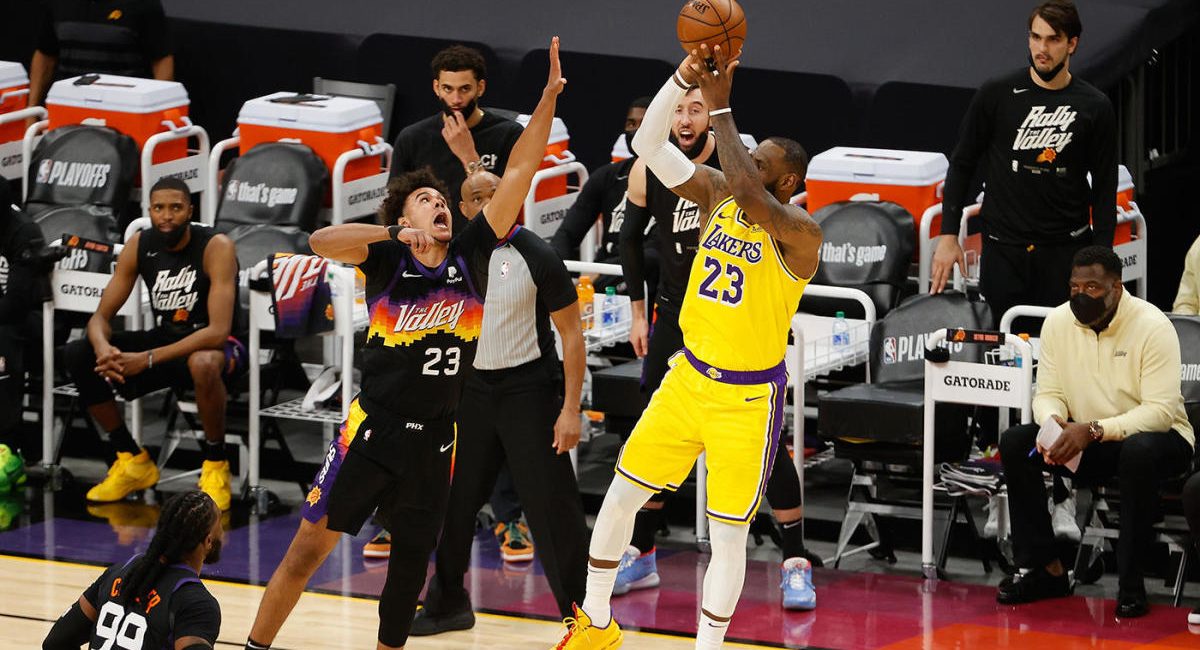 Welcome back to the NBA Star Power Index — a weekly gauge of the players who are most controlling the buzz around the league. Reminder: Inclusion on this list isn’t necessarily a good thing. It simply means that you’re capturing the NBA world’s attention. Also, this is not a ranking. The players listed are in no particular order as it pertains to the buzz they’re generating.

The Mavericks being up 2-0 on the Clippers is one of those postseason developments that sounds shocking, but actually isn’t completely surprising when you really think about it. Doncic is the reason for that. He’s the best player in a series that includes Kawhi Leonard.

Honestly, what is this all about?

A one-legged side-step three from 25 feet? That would be crazy if it was a buzzer-beater, but it wasn’t. It was a simple 2-for-1 shot. Regular flow of the possession. Just flicked it up there like he was playing in the backyard. Dude is straight up nuts. The highlights are poetry.

Through two first-round games, Doncic has posted 70 points, 18 assists and 17 rebounds on 51-percent shooting, including 42 percent from 3. Through eight career playoff games, all of which have come against the Clippers, the guy is averaging 35.0 points, 9.5 rebounds and 8.8 assists. Want to know how many other players in history have put those number up through their first eight playoff games? Zero.

Even if you take away the assists and rebounds and just look at the scoring, please look at the company Doncic is keeping.

Doncic has the Clippers in a torture chamber. You play him as a scorer, he’s arguably the best kick-out passer in the league; nobody else gets as deep into the lane so regularly as Doncic, to the point that at times you’re sure he’s buried, only to whip some ridiculous pass out to an open shooter.

He’s so strong and quicker than you think. The game plays out in slow motion for him. He never gets sped up. He sees and exploits every angle before anyone else. He’s too much for Paul George. Ty Lue has to put Kawhi Leonard on Doncic more in Game 3, but even that’s not a consistent answer. Luka, already, is one of the few truly indefensible players in the world, and if the Clippers don’ somehow rally to win four out of the next five games in this series, they are going to be seeing him in their nightmares for a very long time.

The Lakers were lucky to get out of Phoenix with a 1-1 split. Chris Paul, who we’ll get to shortly, is basically playing with one arm, and it was all the Lakers could do to escape in Game 2. LeBron finished with 23 points and nine assists, but a bunch of that scoring production came late. He has, for large chunks of both games, been oddly deferential in the half court, allowing Dennis Schroder to take control of the offense.

LeBron only took 16 shots in Game 2. In Game 1, he only took 13, finishing with 18 points. These are not LeBron numbers. Having said that, he hit three absolutely filthy fadeaways that have to be highlighted.

First falling out of bounds in the corner:

Then from the top of the circle:

Then in a one-point game with under three minutes to play:

For good measure, LeBron iced the game with a 3-pointer:

You would think that LeBron will eventually have to be better than he’s been through the first two games of this series if the Lakers are going to advance, especially if Paul’s shoulder situation improves, but those shots are a reminder that when it gets down to it, he can still be the best player in the world when he needs to be.

Young has become the latest Madison Square Garden villain and it’s awesome. In Game 1, Young torched the Knicks for 32 points, 10 assists and seven rebounds, joining LeBron James, Chris Paul and Derrick Rose as the only players in history to post at least 30 points and 10 assists in a playoff debut.

Oh by the way, he also hit the game-winner.

Entering more select company, Young joined Dwyane Wade as the only players over the last 20-plus years to make a game-winning shot with under two seconds to play in their playoff debut. You can see him shushing the 15,000-plus Garden crowd. He’s a natural villain. Small. Cocky. Flashy. And absolutely dominant — not just as a scorer but as a surgical playmaker — when he gets it rolling.

“When you’re in a zone, and everybody’s chanting F-U … it got real quiet at the end,” Young said in his postgame interview with the TNT studio crew. “For me, I wanted to hear those F-U chants again.”

Oh, he heard the chants again.

As you might expect, Knicks fans came back in full force on Wednesday night for Game 2, showering Young with boos and chants from start to finish. Late in the fourth quarter with the game firmly in New York’s favor, the MSG fans reprised their “F— Trae Young” chorus, and even Young couldn’t help but smile before inbounding the ball.

As Young walked back to the locker room after the final buzzer sounded, he turned toward the rabid fans and appeared to say, “I’ll see you in the A,” in reference to Friday’s Game 3 taking place in Atlanta.

Derrick Rose, for one, likes the back and forth between Young and the crowd. Sees it as part of the territory. They way it should be. The way it used to be.

If you’re thinking the crowd got to Young in Game 2, think again. The Hawks might’ve lost, but Young certainly did his part with 30 points and seven assists on 4 of 7 from 3-point land, becoming just the sixth player in league history to hit the 30-point mark in his first two playoff games.

Game 3 is on Friday. Buckle up.

When I said at the top that being included in the Star Power Index isn’t necessarily a good thing, I was talking about Paul, who is all over the headlines for all the wrong reasons. We should be talking about an arguable top-five MVP candidate giving James and the Lakers all they can handle, but instead we’re talking about Paul’s shoulder and how the postseason injury bug has, almost unbelievably, bitten him again.

From my Game 2 postgame wrap-up:

They’re calling it a contusion, but it doesn’t really matter what you call it. What matters is Paul is basically playing with one arm. He looked a smidge more right-hand capable in Game 2 than he did after the injury occurred in Game 1, when he could hardly keep control of the ball, but not by much. He took just five shots. Scored six points. Played just 23 minutes. Paul is one of the best clutch players in the world, and Monty Williams couldn’t even afford to have him in the game to close the fourth quarter.

It stinks. There’s no other way to say it. Paul’s postseason injury luck, or lack thereof, has ventured into the realm of cruelty. Over the course of his career, Paul has suffered an injury during a playoff series that either significantly limited his abilities, or took him out entirely, four times. The worst was in the 2018 Western Conference finals, when he ripped his hamstring at the end of Game 5 and was forced to miss Games 6 and 7. The Rockets lost those games, squandering their 3-2 series lead and Paul’s best shot at a title.

This season, Paul and the Suns enjoyed an extraordinarily healthy campaign, but the bug has bitten Paul again. It’s brutal, but it’s the card he and the Suns were dealt. We’ll all hold out hope that Paul’s condition will improve before the series potentially slips away, but right now, it doesn’t look good. Unless you’re a Lakers fan.

Simmons is perhaps the most polarizing player in the NBA. He doesn’t shoot. He sometimes barely scores. Though the Sixers are up 2-0 on the Wizards and Simmons has been dominant as a defender, rebounder and playmaker, critics latched onto six-point effort — with an 0-for-6 showing from the free-throw line — after Game 1, casually ignoring the fact that he racked up 15 assists and 15 rebounds. Doc Rivers, as he has done all season, came to Simmons’ defense.

“If you guys don’t know the treasure you have by now, then shame on everyone because he’s been fantastic for us,” Rivers said of Simmons. “He creates points every single night for us. When Ben was on the floor, we were really good … I’m amazed that people don’t see what he does.”

Simmons also spoke on his own behalf.

It’s pretty tough to argue with Simmons’ point. It’s not just hard to post 15 rebounds and 15 assists in a playoff game, it’s historic: Since 1968, only five players have done that, and the other four are LeBron, Fat Lever, Jason Kidd and Magic Johnson. Also, as Simmons said, isn’t the point to win? To value positive impact that goes beyond scoring? In Game 1, Philly was plus-18 in Simmons’ minutes and minus-11 when he sat. He must be doing something right.

In Game 2, Simmons seemingly gave the people what they want with 22 points, nine rebounds and eight assists on 11-of-15 from the field while still making defensive plays like this:

None of this is to suggest that Simmons doesn’t need to remind himself to be aggressive as a scorer. Some nights he does it, some nights he doesn’t. There will be tougher matchups than Washington down the road for the Sixers, and a non-threat on the offensive end can become crippling as postseason defenses buckle down. But all told, Simmons is playing fantastic right now, and I say that as someone who has often questioned whether he limits Philly’s ultimate championship potential because of the same points critics tried to make after Game 1.

Morant, to me, feels like the closest thing we’ve seen to prime Derrick Rose.

The Grizzlies did their job in Utah, coming out with a 1-1 split as a No. 8 seed. They’ll take that all day. In Game 2, despite the loss, Morant went for 47 points (A Memphis franchise playoff record), becoming the youngest player in history to score more than 45 points in a playoff game and the second-youngest to score at least 45, trailing only LeBron James. If you want to drop the criteria to 40 points, look at this list Morant joined.

Morant doing this as a predominantly interior scorer against a top-flight defense led the best paint/rim protector in the business in Rudy Gobert is incredible. Memphis is feeling itself right now. Donovan Mitchell is back for Utah, but the Grizzlies feel great about where they are heading into Game 3 on Saturday.