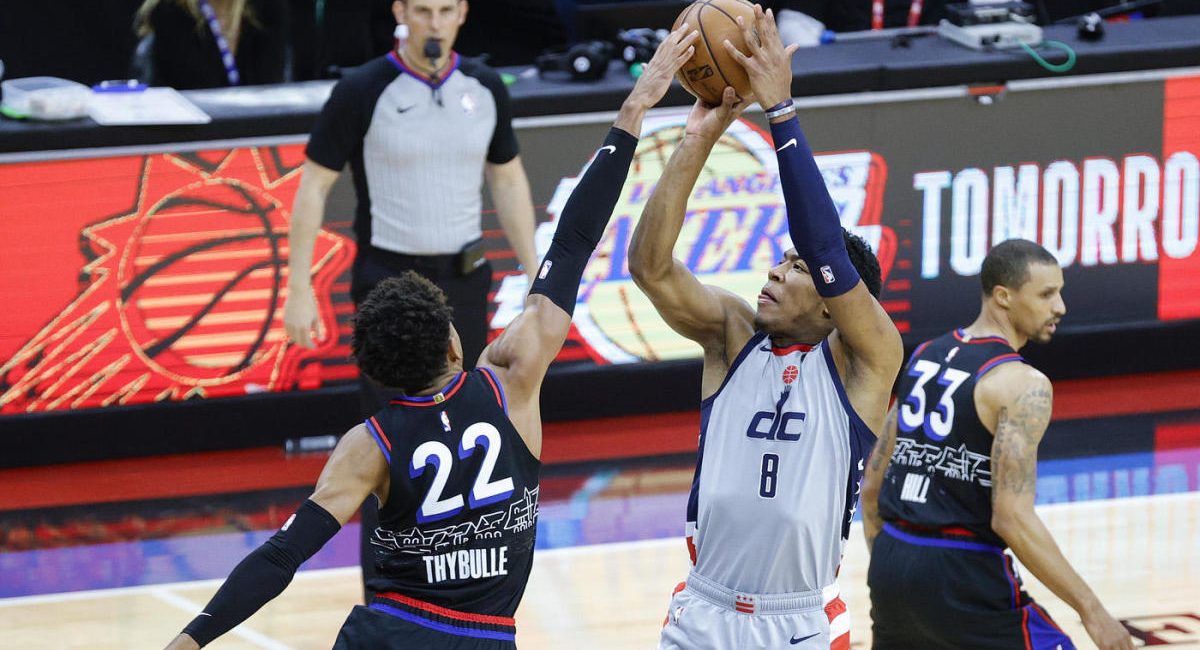 76ers’ Matisse Thybulle puts on a defensive clinic in Game 2 vs. Wizards and makes NBA history in the process

76ers reserve guard Matisse Thybulle played just 19 minutes in Philadelphia’s 120-95 Game 2 win over the Washington Wizards on Wednesday night, but that’s all the time that he needed to put on a defensive clinic. Thybulle maximized his minutes, and he finished the game with 5 points, 5 blocks and 4 steals. With that stat line, Thybulle made some NBA history by becoming the first guard to compile at least 4 steals and 5 blocks in a playoff game. He also became the first bench player ever to do so, and the first to post those stats in less than 20 minutes of action.

It was an extremely impressive performance by the second-year Sixer, who has quickly earned a reputation as one of the league’s best defenders. And for good reason. Thybulle has all of the tools on that end of the floor. Look how quickly he goes from out of the picture to the extended elbow to the opposite wing to block Davis Bertans‘ shot attempt early in the second quarter on Wednesday night:

That’s some excellent awareness and closing speed from Thybulle right there. And that was just his first block. He followed that one up with four more, including two more on jump shooters.

In just his second season, Thybulle is already arguably the best in the league when it comes to blocking shots from the guard position, and that was on full display in Game 2. Then there were the steals. Four of them — largely the result of Thybulle’s advanced awareness and nose for the ball.

Probably the best individual example of Thybulle’s dominant defense from Game 2 came early in the fourth quarter of the contest when he had Wizards forward Rui Hachimura gasping for air.

Since Thybulle stuffed Hachimura’s shot and then stole the ball from him on the same possession, it seems safe to say that’s a sequence that Hachimura will try not to commit to long-term memory. Thybulle has been making plays like this all year, so his performance wasn’t a surprise for the fans in Philadelphia, but it’s still impressive to see just how much controlled chaos he can bring off the bench in limited runs.

After the game, Sixers coach Doc Rivers compared Thybulle to Hawks guard, and three-time NBA Sixth Man of the Year Award winner, Lou Williams. At face value the comparison might seem like an odd one, but the comparison is very valid, as Williams is known for providing instant offense off of the bench, and Thybulle does the same defensively for Philadelphia.

“I guess you can say he’s our defensive Lou Williams,” Rivers said. “Like Lou Williams, and I had Jamal Crawford, both of those guys, offensively when you threw them in, you told them if they pass the ball once you are going to take them out. Their job was to score. Matisse’s job is to get stops when he comes in. I haven’t had a lot of guys [like that]. Tony Allen, I guess, way back, was very similar because he was coming off the bench for us.”

This was the second straight game that Thybulle drew praise from the team for the impact that he made on the defensive end. After Game 1 on Sunday, Joel Embiid said that he thought Thybulle played the best on the whole team on that end of the floor.

“He was great,” Embiid said. “I thought he did probably the best job out of everybody on the team, and it was huge. I’ve been preaching for the whole season whether it’s being on the All-Defensive Team or saying that he has a chance to be Defensive Player the Year if he got the minutes needed to accomplish that. So he’s been huge all season, and we’re gonna need him to do the same.”

The Sixers have a Defensive Player of the Year finalist in Ben Simmons and an elite rim protector in Embiid, and Thybulle might be the best defensive player on the team. He appears destined to make multiple All-Defensive teams and contend for multiple DPOY trophies over the course of his career. Those things will come with increased on-court opportunity as he continues to develop as an overall player. In the meantime though, Thybulle has already carved out an important role for himself despite being somewhat unpolished on the offensive end. The Sixers are a legitimate contender thanks largely to the strength of their dominant defense, and Thybulle is a huge part of that.